My response – My opinion…I do not completely disagree with the writer of the post found at the link below.  I just don’t think this specific situation applies to the point.

Readers: You do not have to agree with me and I will not dislike you if you don’t.

There is nothing “constructive” about the criticism plaguing Beer Advocate, Twitter and other Social Media outlets with regard to craft brewing.  Expressing dislike for a beer based on style, flaws or personal taste is not the issue. There are heaps of beers I don’t care for.  Brewers understand and accept this type of criticism and while hard to hear, it is expected.

Generalized bashing of brewers and breweries that are the rants of immature, socially inept, cowards hiding behind a computer screen; are not constructive.  Put these “self-proclaimed beer experts” in front of a live audience of true craft beer advocates and they will crap their skinny jeans before being able to speak a word of criticism.  Do you really think comments like “I would not water my plants with your shitty beer” or “your beer tastes like asparagus piss” are helpful or constructive?  I think not.  This is an example of some of the utter crap we witness on a regular basis.

Technology is a wonderful thing but it provides anonymity to people with motives that are non-constructive and at times even criminal.  Just look at the increase in pedophilia in the US as it correlates to Internet access.  When these nasty beings had to show their faces in public to feed their disease; it was at far greater consequence.   With a computer hiding their identity, it has become far too easy to act on the sickness.  Yes…I realize this is far from a like comparison, but unfortunately the principle is the same.  It’s easy to spout off from a computer keyboard than it is from a podium.  This is what separates the BA “Boys” from real men & women that offer up descriptions of the characteristics that do not appeal to them.

Craft brewers and breweries take big financial chances to give beer drinkers in the United States choice.  It is high risk, expensive, stressful and often lacking in financial reward.  No one is forcing people to buy or drink these beers.  We have the freedom to choose in America.  If you don’t like something; don’t drink it again.  Whether I like a beer or not, I respect the gumption behind the source.  I do not want to discourage others from venturing into this very difficult field.  I support those who take risks to follow their passion.  We would be in a sad state if no one wanted to pursue this trade.  My palate, pallet, palette… (Yes I’m talking to you Conan the Grammarian) is my own personal taste.  My opinion differs from some of my most respected beer friends.  So what?  No one died and made me the “God of Beer Tasting”; especially if my review is built on insulting rhetoric.

To the douche-bags on Beer Advocate and other web-based forums that throw out petty and trite criticisms, I challenge them to get up on a stage at GABF and spout this beer snobbery dogma to the people who celebrate the craft instead of bashing it.  It is doubtful they will get much support but even more unlikely that they would even have the balls to step on to the stage to begin with.  It is also unlikely that these armchair beer critics would mortgage their house (or their parent’s for those still living there) to start their own craft brewery.  That takes courage and people who rant behind a computer screen don’t know the definition of courage.  I for one would boo their happy bums off the stage.

Beer Advocate…you offer heaps of valuable information to the industry and you have earned your place.  This criticism is not of BA.  There are many good people who participate in reviewing beers.  I do however, wish you would take these negative threads down but I realize this is a “freedom of speech” conflict in the US.  There is no easy answer.

Search “Beer Geek Meets Girl” on YouTube to get a real idea of what these “beer God critics” look like or check the link below.

disclaimer:  I make mistakes when I type.  I misspell at times and I use words out of context.  I am not perfect. Get over it. #enoughsaid

The link below will take you to the article I am responding to. 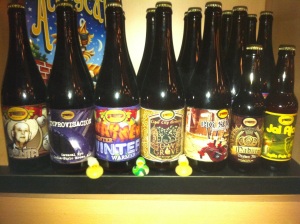 On a recent trip to South Florida I had the good fortune of meeting up with some stellar beer folks at Coffee District in Delray Beach;  just north of Ft. Lauderdale.  On previous trips to that area I had struck out from a beer experience perspective so I was thrilled with the prospect of finally getting to experience the craft beer available there.  The beers I sampled are too numerous to mention so I will highlight just a few…

I arrived at Coffee District armed with a box full of California Beers to share but my mission was to experience beer available in  Florida.  I was greeted by the friendly group of regulars assembled for the Monday night bottle-share.  My eyes were instantly drawn to Southern Tier & Terrapin selections available from the bottle list of approximately 100 beers.  I was in the right place!

My first pick was the “Maduro Brown Ale”  from the elusive Cigar City Brewing.  Deep Brown with a tan head, this  5.5% ABV Beer was full of roasted malt flavors, the bitterness of dark chocolate and a subtle coffee note on the finish.

Next up was a special treat from US Marine Corp Sergeant,  Anthony Kirkish, a former San Diego resident now stationed in Florida.  Tony brought a bottle of Dogfish Head “My Antonia” which was named after a book written by one of my all-time favorite authors,  Willa Cather.  This continually-hopped Imperial Pilsner was originally brewed by Sam Calagione at Birra del Borgo in Italy with brewer Leonardo DiVencenzo in October of 2008.  In was then brewed in the US for release in 2010.  Floral hops, citrus and honey on the nose.  Medium mouth-feel and creamy with hints of citrus and hops,  this 7.5% ABV beer was the most unique Pilsner I have ever tasted.  I really liked it and would definitely love to try this beer again.

The Cigar City “Sea Bass Farmhouse Ale” was a pleasant surprise. It pours a dark, reddish-brown and is sour on the nose.  It reminded me of a Wild Ale and was not honestly,  a beer I expected from Cigar City.  This one-off beer has a full mouth feel, plum & cherry sour on the front with just the right amount of funk.  It mellows to a slight sweetness on the finish.  I was surprised to find that the ABV was 8% which is rather strong for this style of beer, but I really liked it.  It would be a big hit with  San Diego sour lovers…

The most surprising and amazing experience of the evening was my introduction to Funky Buddha Brewing.  They opened in September of 2010 and they bring a new dimension to Florida Craft Brewing. Already famous for their Maple Bacon Coffee Porter,  I had the pleasure of sampling “Last Snow” which is a Milk/Coffee Porter.  This 6.3% ABV beer was like an Almond Joy explosion in my mouth.  It was made with white coffee which frankly, I had never heard of but I am certainly glad that I have now.   The beer is well-balanced; from the nose to the finish.   I must confess that I refilled my glass several times because I could just not get enough of the amazing flavors.   It was the perfect pairing with the delicious Coffee District Carrot Cake.  I kid you not; this brewery is off the hook and I would swim to Florida to try more of their fabulous beers.

The people I met at Coffee District were delightful and filled with passion about the beer they shared.  The laws in Florida make it very difficult for craft brewers and distribution into the state is also challenging but the maverick spirit of craft beer lovers clearly prevails.  This San Diego girl left with a new perspective on Florida beer and memories of great people, willing to share what they are proud of.  I can assure you, Florida is not a Craft Beer Wasteland!

Special thanks to Ed Roberts from Total Wine and Rob from Daily Beer Review for hooking me up with the bottle share at Coffee Grind.  Next time you visit South Florida; be sure to reach out to them.